Pregnancy is the carrying of one or more embryos or fetuses by female mammals, including humans, inside their bodies. In a pregnancy, there can be multiple gestations (for example, in the case of twins, or triplets). Human pregnancy is the most studied of all mammalian pregnancies.

Human pregnancy lasts approximately 9 months between the time of the last menstrual cycle and childbirth (38 weeks from fertilisation).

A woman who is pregnant for the first time is known as a primigravida or gravida 1: a woman who has never been pregnant is known as a gravida 0; similarly, the terms para 0, para 1 and so on are used for the number of times a woman has given birth.

In many societies medical and legal definitions, human pregnancy is somewhat arbitrarily divided into three trimester periods, as a means to simplify reference to the different stages of fetal development.

The first trimester period carries the highest risk of miscarriage (natural death of embryo or fetus). During the second trimester the development of the fetus can start to be monitored and diagnosed. The third trimester marks the beginning of viability, which means the fetus might survive if an early birth occurs.

Before pregnancy begins, a female oocyte (egg) must join, by male spermatozoon in a process referred to in medicine as “fertilisation”, or commonly (though perhaps inaccurately) as “conception.”

In most cases, this occurs through the act of sexual intercourse, in which a man ejaculates inside a woman, thus releasing his sperm. Though pregnancy begins at implantation, it is often convenient to date from the first day of a woman’s last menstrual period. This is used to calculate the Estimated Date of Delivery (EDD).

Traditionally (according to Naegele’s rule, which is used to calculate the estimated date of delivery, or EDD), a human pregnancy is considered to last approximately 40 weeks (280 days) from the last menstrual period (LMP), or 37 weeks (259 days) from the date of fertilization. However, a pregnancy is considered to have reached term between 37 and 43 weeks from the beginning of the last menstruation. Babies born before the 37 week mark are considered premature, while babies born after the 43 week mark are considered postmature.

According to Merck, the norm for human pregnancy is that it lasts 266 days from the date of fertilization. This is 38 weeks, or approximately 8 Gregorian months and 22.5 days, or 9.0 lunar months). Counting from the beginning of the woman’s last menstrual cycle, the norm is 40 weeks (the basis for Naegele’s rule).

According to the same reference, less than 10% of births occur on the due date, 50% of births are within a week of the due date, and almost 90% within two weeks. But it is not clear whether this refers to the due date calculated from an early sonograph or from the last menstruation (see further down).

Though these are the averages, the actual length pregnancy depends on various factors. For example, the first pregnancy tends to last longer than subsequent pregnancies.

An accurate date of fertilization is important, because it is used in calculating the results of various prenatal tests (for example, in the triple test). A decision may be made to induce labour if a baby is perceived to be overdue. Due dates are only a rough estimate, and the process of accurately dating a pregnancy is complicated by the fact that not all women have 28 day menstrual cycles, or ovulate on the 14th day following their last menstrual period. Approximately 3.6% of all women deliver on the due date predicted by LMP, and 4.7% give birth on the day predicted by ultrasound.

The beginning of pregnancy may be detected in a number of ways, including various pregnancy tests which detect hormones generated by the newly-formed placenta. Clinical blood and urine tests can detect pregnancy soon after implantation, which is as early as 6-8 days after fertilization. Home pregnancy tests are personal urine tests, which normally cannot detect a pregnancy until at least 12-15 days after fertilization. Both clinical and home tests can only detect the state of pregnancy, and cannot detect its age.

In the post-implantation phase, the blastocyst secretes a hormone named human chorionic gonadotropin which in turn, stimulates the corpus luteum in the woman’s ovary to continue producing progesterone. This acts to maintain the lining of the uterus so that the embryo will continue to be nourished. The glands in the lining of the uterus will swell in response to the blastocyst, and capillaries will be stimulated to grow in that region. This allows the blastocyst to receive vital nutrients from the woman. Pregnancy tests detect the presence of human chorionic gonadotropin 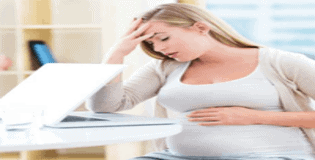 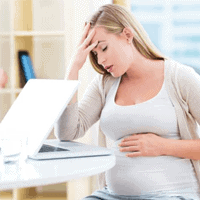 Headache,cramps and backache in early pregnancy 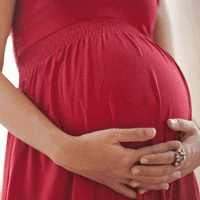 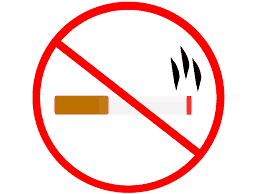